Rejoice, O good Gatekeeper, who openest the portal of paradise unto the faithful!

History of the Iveron Icon of the Holy Theotokos

"I testify by God that apart from God Himself, there is no one in the universe so full of Divine power and grace.  None of the people can comprehend with their minds what I have seen and understood not only with my mental but also with my bodily eyes. I confess before God: when I was brought before the face of the Blessed Virgin with John, shining among the apostles, like the sun in the sky, I experienced unspeakable feelings.  Some divine radiance shone before me.  It illuminated my spirit, I felt the fragrance of indescribable aromas and was full of such delight that neither my infirm body nor my spirit could bear these signs and the beginnings of eternal bliss and heavenly glory.  Her grace exhausted my heart, my spirit exhausted.  If I didn't have your instructions in my memory, I would consider Her to be the True God. I can't imagine more bliss than the one I felt then.”

- St. Dionysius the Areopagite in a letter to St. Paul the Apostle

The history of the original icon of Iveron leads us to the times of iconoclasm.  During the reign of the Byzantine emperor Theophilus (829-842), a cruel persecution of icons raged. Orthodox Christians were brutally tortured, and countless icons were destroyed.  Few managed to save their lives and the most revered icons were ransomed for large sums of money.

In Nicea (now the Turkish city of Isnik), a rich, virtuous widow lived with her young son.  The widow was praying in front of the icon in her house chapel one night when the iconoclasts came to abuse the holy image. One of the soldiers struck the icon with a sword.  The blow fell into the image on the right cheek of the Most Pure Mother of God and immediately blood poured out of the wound.  The frightened executioners hurried away, responding to the widow's pleas by agreeing to wait until the morning and promising the unthinkable amount of ransom for the icon.

At that time, many Orthodox Christians wanted to protect the icons from blasphemous desecration and did so by hiding them, lowering them into the waters of rivers and seas, and other such attempts to hand their fates over to the will of God.  The Nicéan widow also handed her precious image of the Theotokos to the will of God.  After the departure of the soldiers, she and her son went to the seashore and, with many prayers, parted with her icon by lowering it into the water.  As if responding to the loyalty of a courageous woman, the icon did not sink to the bottom, but becoming vertical and facing the shore, began to quickly move west until it disappeared from sight.  The young man, heeding his mother's pleas, fled that night to Mount Athos where he remained there and later accepted monasticism.  His story about a selfless mother, who undoubtedly suffered martyrdom from iconoclasts, and a detailed description of the extraordinary image of the Virgin, was preserved in the traditions of the Holy Mountain. 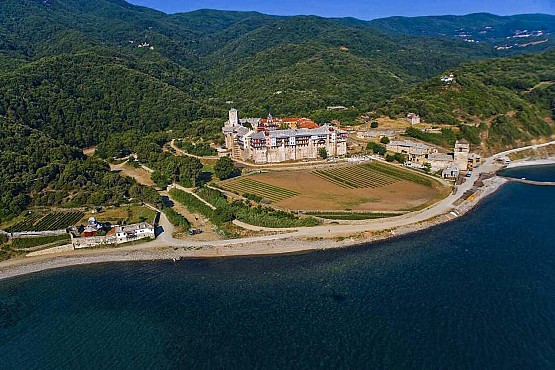 On Mount Athos, during the abbotship of St. Ephemios in the Georgian monastery of Iveron on Tuesday of Bright Week in the year 999, the monks were struck by a terrible and, at the same time awe inspiring phenomenon - on the surface of the sea they saw a pillar of fire emanating from an icon.  Great excitement engulfed the monastery and with prayers many tried to take the icon by boat, but every time they drew near, it was moved further away.  Then, after their return to shore, the fiery icon again approached the shore. 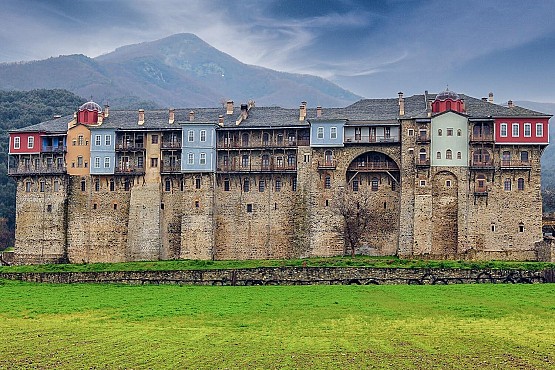 The confusion of the brethren grew, for a mysterious event such as this required some kind of action from them, but the action itself was unknown.  This continued for several days, until they learned from Elder Gabriel the Georgian, who was struggling in a cave high above Iveron Monastery, that at night the Most Holy Theotokos appeared to him in a dream.  Her will was revealed - the Mother of God wants to give Her image for protection and help to the monastery, and he must, without fear, walk through the waters and receive the icon. 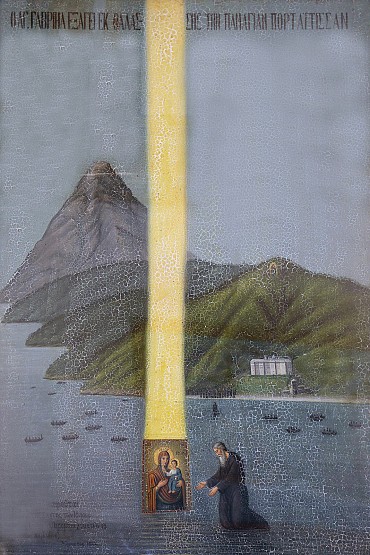 That night, to the chanting of monks standing on the shore, Elder Gabriel walked through the water and took the Holy Icon.  The brethren served continuous prayers for three days and nights to this wondrous image of the Blessed Virgin, after which they reverently placed it in the altar of the cathedral Dormition Church.  Their fear and awe increased even more when they recognized that this was the icon described by an already deceased monk - the son of a Nicéan widow.  For, on the right cheek of the Most Pure Theotokos was clearly the tear from the sword and dried blood. The next morning, after being placed in the Cathedral, the icon was missing from the altar and after a long search it was seen on the wall in a niche above the gates of the monastery.  Not understanding what had happened, the monks carried her to the altar but again in the morning the icon was found above the gates.   The same thing happened for the third time.

Again, the Mother of God spoke to the humble Elder Gabriel, appearing to him: "Declare to the brethren that they no longer tempt Me and leave My image at the gates.  I do not want to be protected by you, but I want to protect you not only in the earthly, but also in the future life.  May all who dwell in the virtuous life and fear of God trust in the mercy of my Son.  And as long as my icon is at your abode, my mercy and grace will not be impoverished to you.”

The icon forever remained at the gates, where the monks later built a temple in the name of the Most Holy Theotokos - "Chapel of the Gatekeeper".  Since then, the Iveron icon is called "Portaitissa", that is, the Gatekeeper of Mount Athos.  The Iveron Monastery, in its location, was the most convenient entrance to the peninsula and therefore the Iveron Portaitissa is the guardian of the entire Holy Mountain.  There is an inscription in Greek on the original Iveron Icon riza: "Mother of God, Gatekeeper, Merciful." After She reached her destination on Mount Athos in 999, there have been countless miracles that have occurred.  As with all wonder-working icons, it was rewritten and copied by many around the world and many of those have also worked miracles.

The Iveron Icon is unique, it takes a special path that few icons can share in their histories, that it is a traveling icon. Its first journey to Mount Athos and to its final resting place on the gate carried by a Heavenly power.  The copies of this Icon also journeyed, this time by human power, chosen individuals who had the ultimate responsibility.  Few such copies were carried by horses throughout Moscow on a carriage fashioned as a chapel adorned with blue velvet on the walls, journeying at all hours to those in despair, healing the sick in soul and body.

Throughout its history, the same story unfolds about taking a journey and being the reason for lives changing for the better.  The Iveron Montreal Icon is one of the most recent stories about traveling the world bringing everyone who prayed for Her intercessions healings of soul and body.  This Icon is like one of the apostles, traveling the world preaching Christ and the True Faith.  St. Ignatius Branchaninov expressed the Iveron Icon best when he was at the Caucasian cathedra: "The icon is the Apostle."

With Her love and mercy, the Mother of God seems to gather the world into a united spiritual organism, breaking the boundaries of cultures to bring the lost souls home to the True Faith.

"From thy Holy Icon, O Lady Theotokos, healings and cures are given abundantly to them who with faith and love draw near to it; likewise, do thou visit mine infirmity also. Have mercy on my soul, O good one, and heal my body by thy grace, O most pure one."

Russian Orthodox Church Outside of Russia